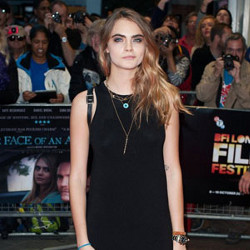 The rumour about Suicide Squad from DC Comics Universe is getting stronger. One thing that spots it is the possibility to add new actress who will get involved into the movie. The model from England, Cara Delevigne is reported to be the one who will play in the Suicide Squad. He is targeted to play for the antagonist character in the movie.

Jesse Eisenberg who plays the biggest enemy of Batman, Lex Luthor in the film Batman v Superman: Dawn of Justice is reported to also deal with the project of Suicide Squad. The other actors which are possible to get involved as well are Will Smith, Margot Robbie, and the actor of character Bane in The Dark Knight Rises (2013), Tom Hardy.

Suicide Squad will tell about a group of criminals who are in DC Comics Universe. They get a second chance to do a secret mission with their freedom as the payment. They will be sent to a high risky dangerous mission that can be ended with their all death. This film is directed by David Ayer who is just succeeded with his film, Fury (2014). He will direct the script written by Justin Marks.

Basically, the complete list of the team for the Suicide Squad has been confirmed yet. But it can be ensured that the figures in the Suicide Squad in the comic will be appeared. The figures like Deadshot, King Shark and Amanda Waller will be the mainstay of the film. Harley Quinn from the Batman comic can also be new character and can be such a door to get related to The Dark Knight.

Cara Delevigne starts her acting debut in the movie Anna Karenina (2012) who is played by Keira Knightley and Jude Law. Film Suicide Squad itself is planned to be released in the year 2016 later.