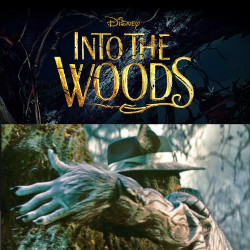 Some weekly entertainment magazines will alternately show the cover of their magazines with the actors and actresses of the movie Into the Woods. And for this week, it is the time for Johnny Depp and a young actress, Lilla Crawford who will be there.

As the characters of the two, Depp will look more eccentric with the costume like a wolf since his character in to movie is The Wolf. He will be such a businessman with a tie and a hat. The director, Rob Marshall little bit concern letting Depp exploring his own character more deeply because it tend to look like a cartoon and full of magic as well.

Meanwhile, beside him is Lilla Crawford who will act as Red Riding Horse. She wears a gown with red mantel and she will turn her head backwards.

The other players in the movie Into The Woods are James Corden and Emily Blunt as a baker and his wife. There are also Meryl Streep and Mackenzie Mauzy as a witch and Rapunzel. There are also Anna Kendrick and Chris Pine as the Cinderella and the prince.

Into the Woods themed about family comedy fantasy is focusing to the story about a baker with his wife who really wants to have a child. Being blind with its wish, the couple comes to a witch and of course the witch gives a difficult condition. The baker and the wife should take a red mantel of Red Riding Hood, white milk cow from Jack, glass shoes of Cinderella, and some gold hairs from Rapunzel.

For the sake of making their wish coming true, the baker should have a journey to a dark and mysterious wild and the adventure is starting. In USA, Into the Woods is scheduled to premiere on the next December 25.