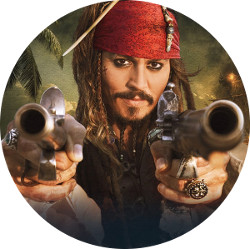 Art minister of Queensland, Ian Walker, also said, "the last big movie production here is San Andreas, which employed up to 3000 crews, players, contractors and extra from Queensland, and the newest movie is Angelina Jolie, Unbroken that employed local residents up to 3.180 people”.

The fifth movie of Pirates of the Caribbean is the bigger movie based on the spending rather than the other movies with big spend. In that way, the economical profit for the country will be greater,” said Walker.

After experiencing some times delays, this fifth movie is confirmed that it will be released on July 7th, 2017. Joachim Ronning and Espen Sandberg are also confirmed to be on the back of the screen, so is Jerry Bruckheimer as the producer, Jeff Nathanson as the scriptwriter and also Johnny Depp as Jack Sparrow.

“We have beautiful experience when took shooting in Queensland several years ago and hope to come back.” Said Bruckheimer “ the sea, beach, forest in Queensland have incredible perfect surrounding for Pirates of the Caribbean.”