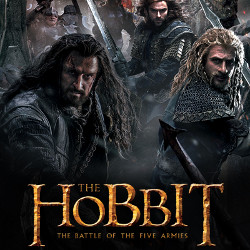 Bilbo Baggins (Martin Freeman) as well as his gnome’s friends led Thorin Oakenshield (Richard Armitage) finally has succeeded to take back the castle and the kingdom of the gnome from a giant fire dragon namely Smaug (Benedict Cumberbatch). But it turns out that it results a consequence that loses a village near to the castle inhibited by hundreds of human.

The dragon turns out anger out by burning the entire village with his fire. It also makes the residents to be victims. Nevertheless, there is a resident namely Bard (Luke Evans) with full of brave and archery skills succeed to kill the dragon. The death of the Smaug relieves all of the residents as well as Bilbo and his gnomes in the castle.

Unfortunately, after the dragon death, there is another dragon emerged. The wealthy in the castle of the gnome become a fight between the two sides. The gnome, the fairy palace or human, want to get their part of the wealthy. Sadly, Thorin who leads the gnome castle is too arrogant and greedy to share the welfare. It is finally triggering a war among them.

Meanwhile, there is a menace hiding and ready to attack them all. The darkness of the palace led by Azog (Manu Bennett) wants to destroy all and take the wealthy entirely. Regarding condition, and after being persuaded by Gandalf (Ian McKellen), the gnomes, the fairies and human finally decide to gather against the troops of the darkness and finish their own conflict.

Those are some keys of incidents happened on the third series as well as the last of The Hobbit titled The Hobbit: The Battle of the Five Armies. This fantasy-adventure movie directed by Peter Jackson seems to be the closing of the trilogy and also to be the incredible end of the year.  There are an abundance of things proving this statement. One of those is the intensity of the fight in the movie.

Indeed, the The Hobbit: The Battle of the Five Armies movie is worthy to be called as a 'Non-Stop Action" movie. It is so far different with the two predecessors. You will be served a colossal far which is almost no rest. The other thing ensure in the third movie is that the all unclear things on the two series earlier will be answered here. Either bad or good, you can figure it out yourself from the movie.

Moreover, you will find a wide range of gigantic duels between the characters. The point is that Peter Jackson succeeds to give a very beautiful last touch on this third and last movie. It will not show any journey anymore, like what shown on the previous ones. Instead, it is full of colossal war that full of actions, tensions and even blood.

Furthermore, thanks to the high definition of graphical and the application of digital technology, your eyes will be totally spoiled by a number of explosion action, magic and harmonisation of soldiers who are in-line so neat and also giant monsters around battle area which look so real. There are also some scenes which applied CGI technology that guarantee to make your eyes will be so focus to see the film.

The thing deserves to appreciate from Peter Jackson is the character of Bilbo and Azog. Jackson is successful to make the character of Bilbo being so nice. This protagonist is unique in which he might be not too much seen but the appearance is so required and determined at the same time. Meanwhile, Azog is the perfect antagonist. This ruthless creature is so cruel. Even the physique could make the ones who see him being antipathy.

Then, is there no dramatic matter in the closing trilogy, at all? The answer, there is any. In fact, those are that makes the movie more attracting and complete. Even there is triangle love in the middle of conflict. It is experienced by Tauriel (Evangeline Lilly), Legolas (Orlando Bloom) and also Kili (Aidan Turner).

So, who will win the war? What will happen to Bilbo and the gnomes? And, what about the ending of the triangle love among Kili, Tauriel and Legolas? Find the answer completely in the premiere since December 17, 2014.