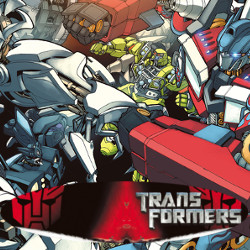 The story is told completely from the beginning, the middle and the end. All of the three direct to the last movie, the Dark of the Moon.

The story in the comic is able to entertain the reader. It also has its own emotion. When the comic is successful, the movie must be more enjoyable.

For Transformer fans, the comic appearance could be the best stuff around you before the movie being released on July 2011.