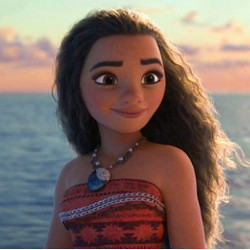 In 2016, Disney released a princess movie in which the main character did not have a love interest. It was a first for Disney. Auli'i Cravalho, a Hawaiian native, voiced the 16-year old Polynesian princess and most the film’s cast also had Polynesian heritage, another monumental moment in movie history. It’s quite possible that you missed the awesome animation of the water because the storyline was so well-developed.

Moana is sent on a quest to save her people. She must leave her safe island home, to take to the ocean, which becomes a character as well as a driving force in the movie. To animate an inanimate object while keeping its natural properties is something of a feat. As an added pressure, most Disney movies do not have many water scenes, but Moana had hundreds of them. Disney teams turned to technology to computer-generate the water in the movie.

Animating a Story Is a Labor of Love

Creating an animated movie is extremely laborious and complex. An artist must create the environment, everything from the props to textures of grass and ground. The characters themselves should be animatable and capable of demonstrating emotion and movement. Other designers work on lighting and effects. Bringing these elements together is much more difficult than a live-action movie. One of the pieces of the environment had to appear lifelike and act as an element of the scene.

The physics of the world must work as well. The scenes must appear realistic. For example, the boat should leave a wake in the water. When waves hit the sand, the sand must appear wet, and then dry as the water recedes. Each subtlety had to be carved out in film through computer generation.

To execute the incredibly lifelike water animation for Moana, Disney used a mix of software. Some, they developed themselves, like Hyperion, Disney’s global illumination renderer, which was used in Big Hero 6. Autodesk Maya was another program that was used and it was customized for Disney. Disney animators developed their own software, Splash, for the movement of water, which allowed animators to show the realistic motion of water. Sister companies under the Disney umbrella also brought experience to the movie.

The ocean character wasn’t the only fluid character. The lava monster Te Kā had to move like molten lava, which is much more dense than water. It was tricky getting the right speed of movement to make the character seem threatening and real. Every movement mattered to the character of Te Ka and of the ocean. Another key development in the film Moana was the movement of hair. Animators used a simulation program which allowed developers to see how hair would move in the wind and the water.

In film, there are 24 frames per second. In CG films, that is one picture for each frame. At 107 minutes, Moana has 154,080 frames. The process is so time-consuming that it can take one week to animate just three to four seconds of a scene. Animators who were interviewed say it’s a lot of fun working on the animation.