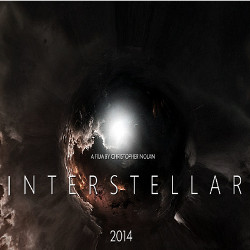 The earth will be wrecked. Sooner or later, the ecology and the elements inside the earth will be no longer in line with the life of creatures living inside. So is human. So, how is the fate of the next life? Interstellar is one of the answers.

Cooper (Matthew McConaughey), an aerospace pilot who is now over the duties to be a farmer. Why? It is because the earth nonarable. It is no longer fertile like it was. Every day, every hour, dust comes like the blowing wind and pollutes the house either in the graveyard or inside of the house. That is why apparently the job as a farmer is required more in order to make the earth alive and the fertility of the land so that it can be food source for human.

Cooper is also a scientific adventurer. He lives with two children namely Tom (Timothee Chalamet) and Murphy (Mackenzie Foy), as well as Donald (John Lithgow), the father of his deceased wife.

There is a weird incident Murphy’s room, exactly on the bookcase. Most often, those books are falling. But the fall is not random. Murphy believes that the time and the pattern of the falling looks containing a certain message. Then, he calls it a ghost. Of course, it is not adjusted to what his father said. Cooper always thinks logically and scientifically.

Until one day, after watching local baseball game, there is dust storm coming. The fog is thick brown and it is so hard to see anything since the visibility is no more than 3 meters. Cooper, Murphy, Tom and Donald sooner go home. When arriving at home, Murphy remembers that his window in his room is not closed yet. Cooper then goes there and closes the window although the dust has been inside.

The weirdest is that the dust should be scattered on the Murphy’s room floor but, it is not like that. There are several parts on the floor which are untouched by the dust and even form a clue or a particular pattern. Cooper tries to solve the puzzle and then he gets the meaning of it, a coordinate from the earth. The coordinate pointed by the pattern is NASA’s secret office. Cooper and Murphy get shocked with this fact. Cooper then is told about the real condition of the earth and what he actually is not only sent to another planet but another galaxy in order to observe impropriety of the galaxy for human life. And indeed, it takes long time to observe.

Christopher Nolan comes with his another masterpiece, Interstellar. It is such a big project since it takes budget as much as US 165 million dollars.  Along with his brother, Jonathan Nolan, Christopher works for the script of the Interstellar. This movie offers you smart content where you will get new knowledge and also new logic which are far away from your own logic.

Furthermore, it is not perfect based on the story but also the visual as well. 70% of the movie locates on the aerospace. And it is not only a dark sky that full of stars but also the surrounding of the spaceship. Those are so much different with what you see on earth.

Despite Sci-Fi genre, the emotional dynamic of Interstellar is very strong. It shows the relationship between a father and his son which is very touching.  On the other hand, Christopher Nolan also presents some humours at just in time. For instance, there is TARS, a robot that helps the astronauts reaching their mission. The robot has a weird sense of humour but can make you laugh.

Warner Bros Pictures, Legendary and Pictures Paramount Pictures have prepared the special present for this Interstellar. You can enjoy it at your lovely cinemas at early November 2014.